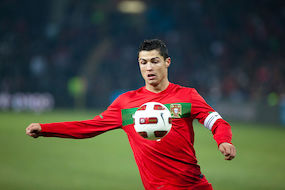 Cristiano Ronaldo’s hat trick sent Portugal into Sunday’s Nations League final, where they will face either England or the Netherlands.

Portugal managed to qualify for the UEFA Nations League semi-finals without their captain, but they were able to bring Ronaldo back to the team for their semi-final tie against Switzerland.

The Juventus star showed his world-class ability and opened the scoring at the Estadio do Dragao. After a fairly slow 25 minutes, CR7 scored a brilliant 25-yard free-kick.

Although, Switzerland equalised through a controversial penalty in the 56th minute, Ronaldo had the final say when he netted two goals during the closing three minutes to complete his treble and clinch a spot in the inaugural UEFA Nations League Final.

Portugal manager Fernando Santos described Cristiano Ronaldo as “a genius” after his 53rd career hat-trick put Portugal into the final of the Nations League on home soil in Porto with a 3-1 defeat of Switzerland.

“It’s one of those things you don’t have enough adjectives to describe” the Portuguese manager added.

Switzerland coach Vladimir Petkovic said about Portugal that “they had the cherry on top of the cake and that made the difference” referring to the Juventus forward.