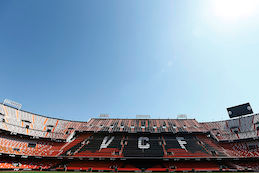 Football without fans would be absolutely nothing and Valencia have paid tribute to a long-time supporter who, despite going blind, renewed his season ticket until the day he died.

Vicente Aparicio, a lifelong Valencia supporter, lost his sight in his 50s due to a detached retina, but his inability to see did not stop him from going to all home matches to feel the electric vibe at Mestalla Stadium. He renewed his season ticket in 1994 and kept coming to matches, to enjoy the atmosphere of the team he loved so much.

While Aparicio’s sight disappeared, his love for the La Liga club did not!

Sadly, he passed away two years ago. But as part of Valencia's centenary year celebrations, the club wanted to show how much they valued Vicente Aparicio by removing his old seat where he sat at every home game - No 164 in row 15 of the central grandstand - and filling the space with a life-sized figure depicting the loyal fan.

Formed in 1919, Los Che are marking their 100th anniversary and the statue of Aparicio is part of their centenary year celebrations. The club recently won the Copa del Rey, defeating Spanish giants Barcelona 2-1 to earn their first major trophy since lifting the Cup in 2008.

This is quite an incredible way to remember Vicente Aparicio and he will forever be at Valencia games cheering on his team in spirit!